0 Items
The Toll of a Scam

A few weeks ago, a client of mine was scammed. Doubled scammed really. I’m still not completely clear on the sequence of events but I will share this story anonymously with you in hopes that you can learn something to protect yourself.

This client happens to fit the classic profile of a scam victim: an older female who lives alone, suffers from a disability, has difficulty with technology, and still drives and handles a lot on her own. She had been on the phone with her legitimate credit card company because they noticed a potential fraudulent charge on her account. This made her fearful, as it has happened before, and she probably began to doubt herself. Then she got a call from “Geeks Library LLC” who told her she had a virus on her computer and that they could provide remote technical support to help her fix it. I don’t know exactly what happened from there, but they did get her to permit remote access to her computer, and probably showed her the Windows error log, which is ALWAYS full of red-letter issues. She believed their story (to a point) and had given them her bank account and routing number to pay them for their ‘help’. Then, luckily, she really panicked, and called me.

She did, and of course they tried to call her back. When she took her computer to her local guru shop, they said that it had been an attempted ransom attack. If she had not powered off her computer, they would have finished installing software that would have locked it up until she paid them a lot of money.

When you go through something like this, you are left shaken, scared, and totally freaked-out about losing money and getting charged late fees for all the bills that will now not get paid because you have to shut down the account that was shared with the perpetrator. It clouds your judgement and takes a huge emotional toll. The only real prevention is to get off the computer, iPhone, etc. and let someone savvier handle it all. If you are online or using email, you can easily get scammed. But that is often the lifeline connecting us to loved ones and friends.

Then there is the restoration work. In this case, the checking account was blocked, and the credit card company issued a new card, with a new number. We have spent much of the past two weeks changing autopayments to new accounts. Social Security alone took hours because she had an account but couldn’t remember the password, and that was one I didn’t have. It affected every insurance payment, credit card payments, subscriptions, you name it. With her disability, restoration would have been impossible to do on her own. It has cost her many hours, sleeplessness, and worry. It also affects every provider who has to take the call and make necessary changes. In short, a scam is very costly to everyone involved. There are no shortcuts.

A Word to the Wise

It’s really hard to protect other people from being scammed. Just know that the less familiar you are with technology, the more vulnerable you are. Here are some tips that I give people to help them recognize when a phone call is a scam: 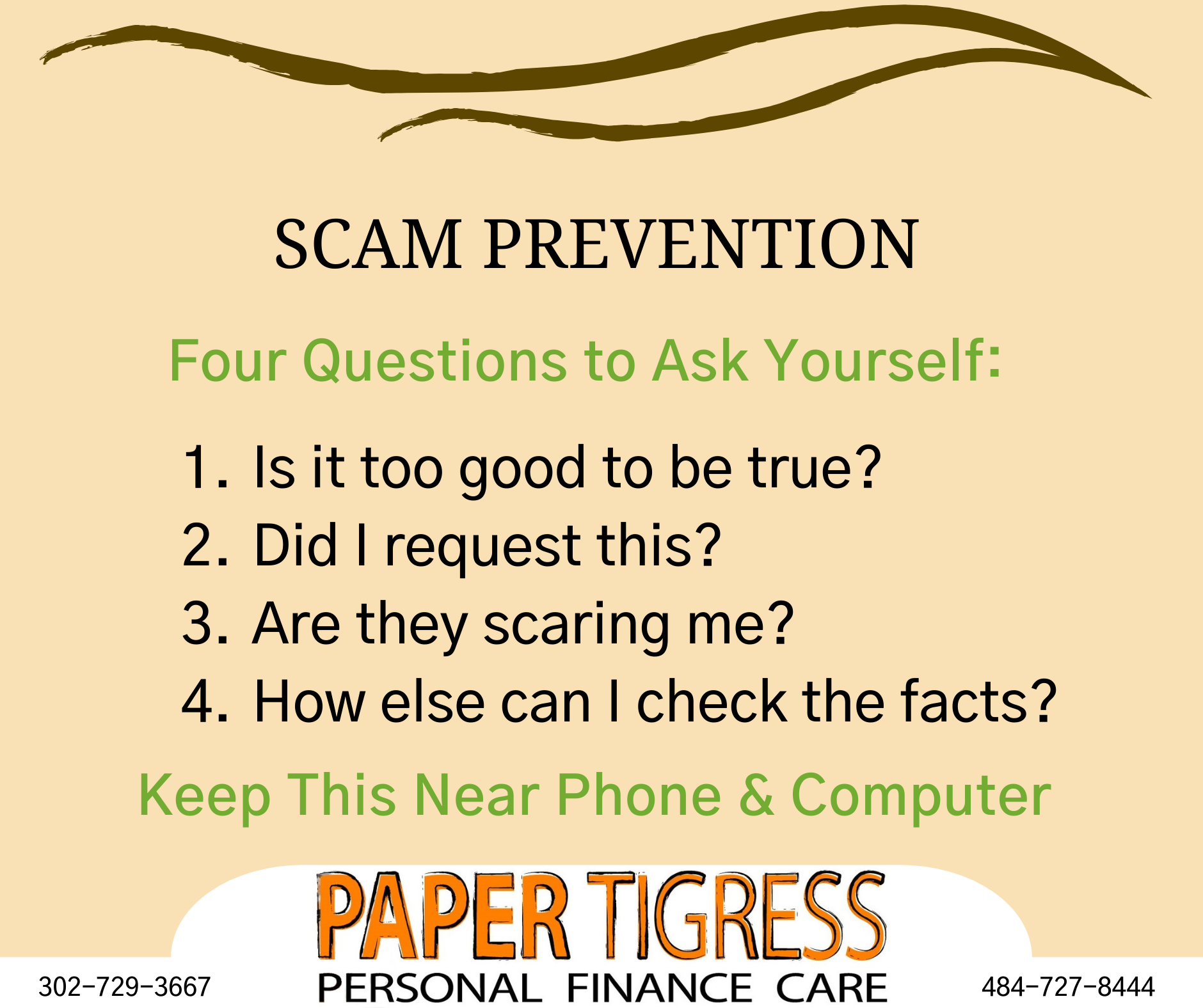 Scammers prey on your emotions first. They inspire fear, greed/desire, or another strong emotion. The key is to stay calm and think rationally. Check companies out yourself before you bite.

Get a printable copy of this graphic: HERE

For more information, follow Paper Tigress on Facebook or LinkedIn for more frequent scam updates. The links are below.

Be the first to hear about upcoming workshops and new educational articles from the Tigress Tales blog.